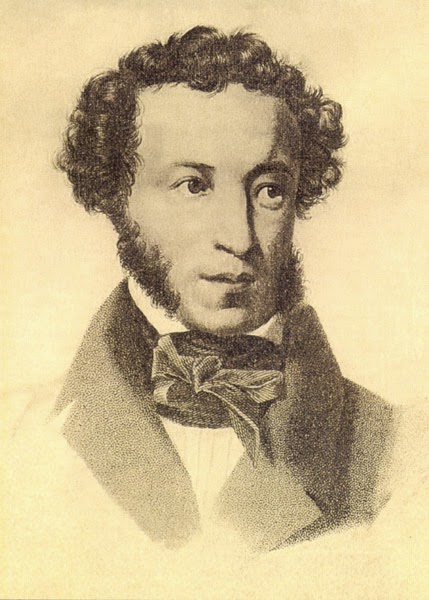 I
How to live without the sky above your head? In no way. Pushkin - our sky. He can be felt, seen, but you can’t touch him. In the world there are seldom, but nevertheless there are miracles. Pushkin - one of such miracles. I think for Pushkin himself his talent, rather, the gift was a mystery the same as for us. Is it necessary to explain unexplainable, isn’t it better to take this as a given, sent down from above. And to read and again return to his sparkling lines, penetrating and alarming, earthy and detached, frightening by the depth of comprehension of the incomprehensible , where already not we, but our souls are walking with his shadow in the backstreets of forebodings  and inspirations, living in every his word, in his poems, wide and irrepressible as the wind in the desert .

II
To see the eternity and to stay alive among the poets was permissible only to Pushkin. Eternity was his shadow. Is it good or bad, I don’t know, but that it’s horribly, and not just horribly, I can only guess. He took the time to make a mystery clear, trying to get rid of this obsession exactly here on earth, but he couldn’t anyhow. And Tatyana's letter to Onegin - only a message to the eternity, an attempt to dissociate himself from his own pain, to pass it to other hands even for a fraction of moments and to fly high into the sky, where it is easy to breathe and a soul doesn’t hurt. And it always hurt: and when he wrote, and when didn’t write, and when he fell in love, and when the love was over. Pushkin never took anything from anyone, he only gave, he loved desperately and selflessly, but who knew about it? Only he did.
Pushkin was an angel who came down to earth where he felt lonely and uncomfortable, and he was seeking as quickly as possible to return to his home. And his age was short, but his life appeared as long as eternity. 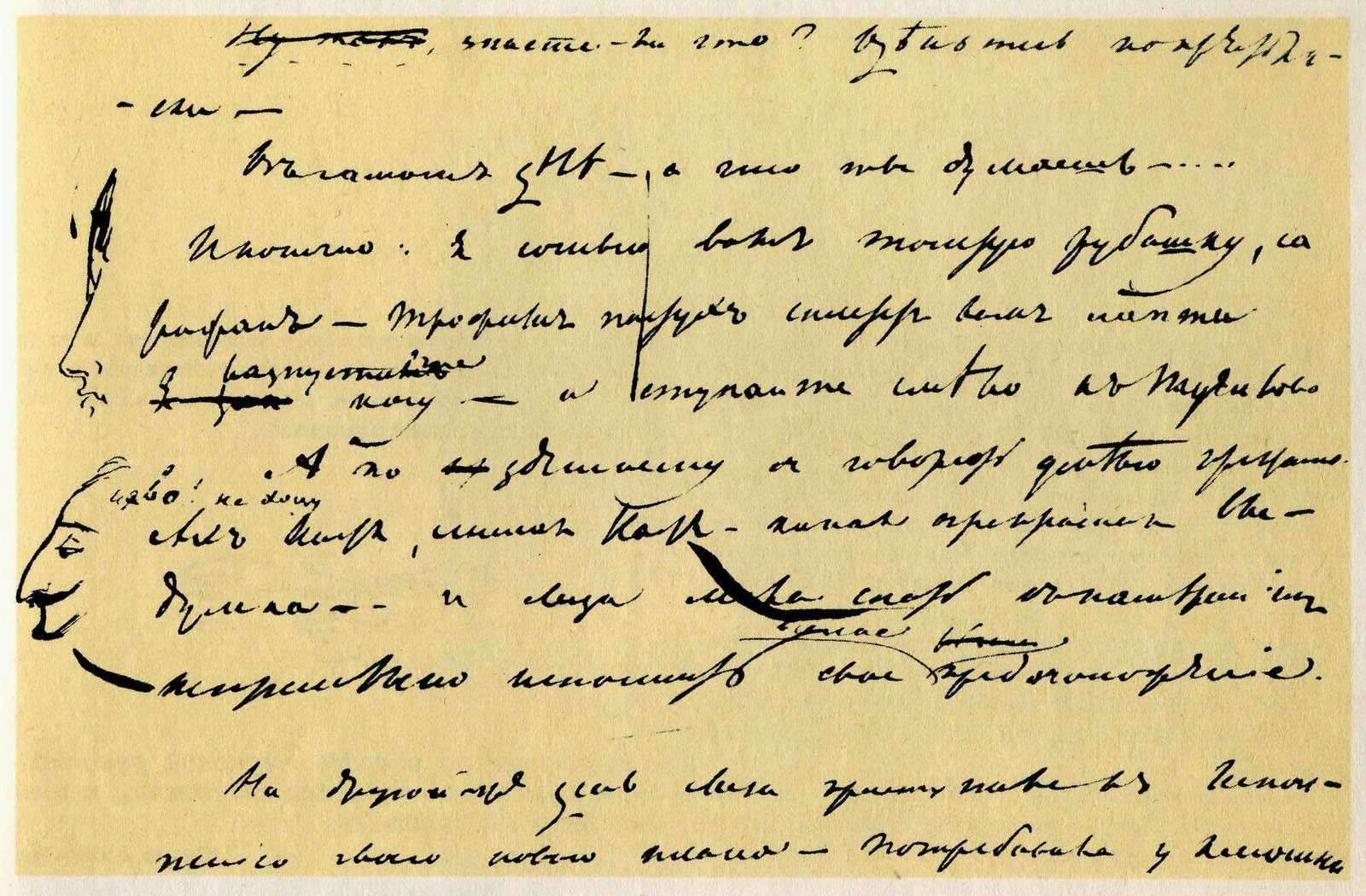 A game isn’t a process, not an obsession, but a moment, after which life turns into a great nothingness, where the power of emptiness gets the highest meaning. You have only to go to the edge of abyss and to make a step, and you're in the arms of the bottomless pit, whose name is a madness of Hermann.
Pushkin doesn’t hide a sympathy for his hero. Wanting to get rid of his own delusions, from a sizzling passion, he decided to be reincarnated into a countess and to bring Hermann a key from the fatal mystery. "Queen of Spades" was born in such a way and a trey, a seven, an ace.

In the depth of his heart Pushkin believed that once in life it’s possible to win a lot, but he did not dare to start a game in which there is more mysticism than hope. And yet one day he took a chance and put it on Hermann, but at the last minute switched the ace to the lady of peak, leaving no chance for salvation neither his hero nor himself. Realism with its gray routine triumphed, and it allowed Pushkin to heal himself from the madness by the cost of Hermann’s craziness, but the abyss had opened up.
"Queen of Spades", perhaps, is the most autobiographical work of Pushkin. He accidentally turned the wasteland of solitude, and in this desolate world his genius celebrates, and the poet makes relocation of his soul into the soul of the Golem - Hermann. Asceticism and conciseness of presentation raised to the rank of the absolute, the line between reality and mysticism erased , and there is a feeling of authenticity and credibility of what is happening , you suddenly catch yourself thinking , why not to go in search of a trey, a seven, an ace to gain long-awaited freedom and peace.

* * *
Stars have their own grief
akin to heavenly shadow,
and sun’s edge, and word’s distance
your glorious genius sung.

You multiplied the silence,
gave wings of glory to oblivion,
the spirit cheered in your captivity
like a double-headed eagle.

In the solitude you found
fields, and groves, and woods,
gentle silk of humble winds
and funs of stingy evenings.

Tell me how you breathe, sing
in the blessed eternal emptiness
and how your soul lives
in the unprecedented heights.

"Eugene Onegnin" - a novel in verse, or a pre dying note. But Dante isn’t Onegin, Pushkin isn’t Lensky and Olga isn’t Natalia Goncharova . Although who knows. Why did Pushkin in "Eugene Onegin" predict his own fate, and perhaps didn’t predict, but told, and maybe a fate of the poet is a plot of the novel? Who then is the main hero? Of course, Pushkin and a little bit - time. The poet has its movement from the future into the present, and from the present to the past.

It turns out at first there was a duel with Dantes, and then a shot of Eugene Onegin. So, Pushkin wrote the novel not here, but there, in the dizzying heights, in the otherworldly reality, where adjutants of the poet played a role of goose feathers, angels of his genius.

It turns out that not Dante, but Pushkin organized "a divine comedy ", creating "Eugene Onegin", the biggest mystification since the time of Adam . If Pushkin could create such a thing and time has no power over him, then he is alive and in a minute or two he can appear with a new novel under a new name. Isn’t a detective story.  And maybe Edgar Allan Poe - it is also the handiwork of Pushkin?

BOTH INSPIRATION AND PASSION

Pushkin’s seasons - autumn and winter. Time of reflections, of long evenings, where loneliness, as Pugachev’s expanse, invades into solitary localities and dominates, swaggers and drinks on the background of angry clouds and ringing of a bell in the steppe, fading and darkling under the pressure of the storm, indomitable and timid, imperious and tender, coming from nowhere and going nowhere.

In such hours the heart can’t retell your love, your doubts and anxieties, shout down the tiredness of deaf silence, it just waits for the good news of memories, and flaming line pour, season of inspiration and passion awakens in such a way to bring another’s pain to life and through the plowing of separation to reach your own soul.

In the privacy of joy and sadness scarlet triumph in the fabulous colors in the solitude, and life unbearable life goes away, over the horizon, into the olden days, behind the impregnable fence, into the prison of the past, and let it be... When there is harsh wine, fireplace, like a glow of the dawn, and there are no another concerns any more than to bother the memory and to live these moments with a violent naive simplicity, comes the power of the God’s gift. 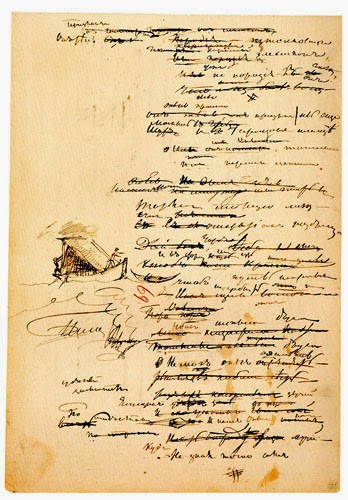 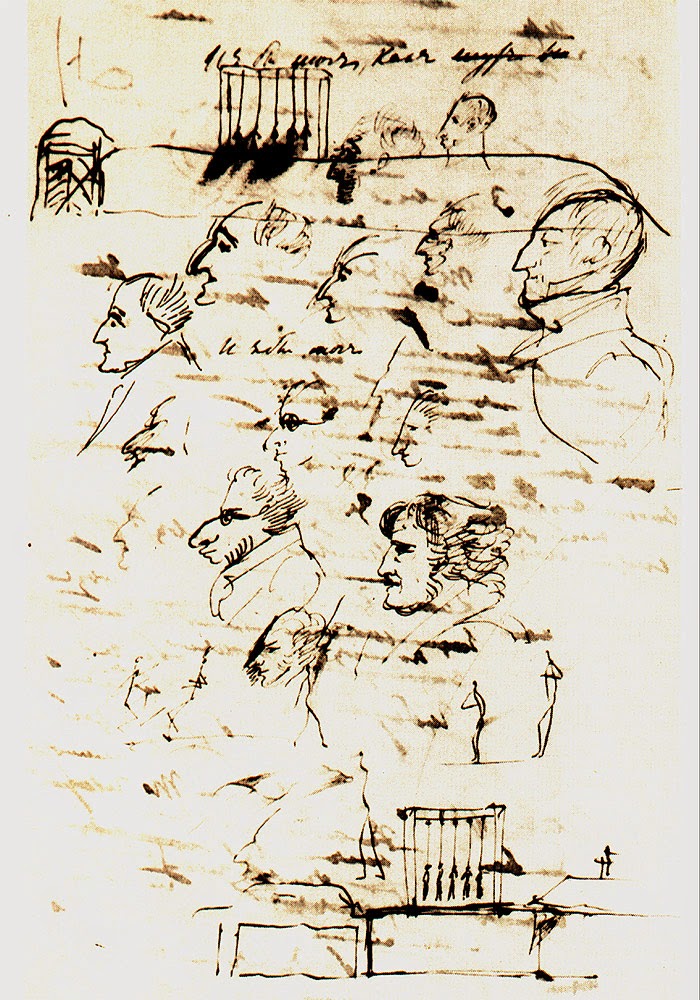 ***
What is Pushkin’s laziness – tiredness because of the plenty of feeling,
because of  the delusion of cares, or perhaps, just a respite,
a pause in the maelstrom of future premonitions , where,
breathlessly, soul of the poet waits for the beginning , when
memories treat the heart by the snake’s sting, naked
autumn is outside the window, and a clean leaf doesn’t breathe,
frozen, at this moment the poet's pen comes alive, and racing on
the snow surface, and time is at the service of the stationmaster,
and the yard people stroke the bath to red whiteness,
but what of it for the poet, runs without tiredness, without a goal
in the harness of lines on the black soil of inspiration to the morning
star, just one moment – and he will touch it with his hand, but
the night goes out, and now the star melts like a snowflake,  and the dawn
unbuttons a collar of the white shirt like a hussar, and drinks
Champagne with a curly friend, and a maiden – laziness looks
archly, when the poet touches it with his eyes and immediately
sits down on the kneels of a friend, and Pushkin, enveloped by jealousy,
leaves the table and leads the sleeping maiden into the bedroom,
he is fed up, it's time for the hussars to know the honor. 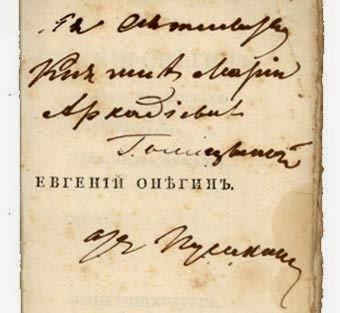